It has been reported that Manchester United boss Louis van Gaal is delighted with the early impressions of new assistant manager Ryan Giggs. 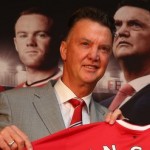 It is said that the Dutch tactician has lauded the Welshman for his work ethic and attitude hinting he sees something of Chelsea boss Jose Mourinho in his assistant.

The 62 year old said: “First of all, we have my assistant manager Ryan Giggs and I’m very pleased with him.

“I talked with him before I signed. Your first impression is always important and that was very good, and now the impression is still improving because I know him better.

“Also, he’s working very hard, as are all my assistants. It’s important that they don’t have a job that’s 9-5.

“You have to work very hard when you’re my assistant – it’s not always a pleasant job. But he’s doing very well and I’m happy he’s on my staff.

“I’m used to keeping one member from the previous staff of the club because I want to know the culture and he can advise me.

“So I always pick up trainer-coaches from the last season; at Barcelona I did that with Jose Mourinho, at Bayern I did it with Hermann Gerland and now it’s Ryan Giggs.

“The staff are more important than the players. It’s unfortunate for the players that I say that but you have to implement a philosophy and therefore you need staff who can give me the confidence that they’re doing the things I require.”