It has been reported that Manchester United boss Louis van Gaal has turned down the chance to sign Feyenoord defender Stefan de Vrij. 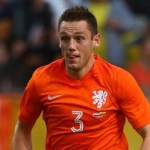 The Mirror claims that Van Gaal has turned down the chance to sign De Vrij for £6.5million.

The Holland international has impressed in Rotterdam again this season and was always likely to move this summer, but a switch to Lazio stalled when his representatives got wind that his international manager, van Gaal, may be interested in making him part of the Oranje revolution at Old Trafford.

As it is, the 62-year-old has declined the opportunity to pick up the man he handed the Dutch armband to for the first time last week as a young Netherlands side drew with Ecuador.