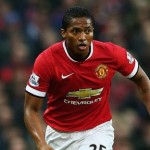 Reports are out claiming that Manchester United boss Louis van Gaal has admitted that he remains frustrated with his line-up.

The Dutch tactician has been pleased with the work of Ashley Young and Antonio Valencia in wing-back slots but feels the attacking duo are not suited to orthodox defensive roles.

“Yeah, but as wing-backs and not as full-backs,” the manager replied when asked how pleased he has been with Young and Valencia.

“Now I am more or less obliged to play with wing-backs because the real full-backs, Shaw and Rafael da Silva, were not fit enough and that is not good. I have to select what I want but now I am forced to select. For a manager, that is not so good.”