It has been reported that Manchester United boss Louis van Gaal will know more today over the extent of Jonny Evans’ injury suffered in defeat to Leicester City. 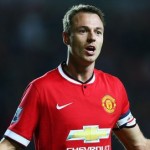 The Northern Ireland international was replaced by Chris Smalling on 30 minutes, having received a kick that led to him reappearing pitch-side for the second half with a protective boot around his right leg. He was on crutches when he later departed the King Power Stadium.

While speaking to reporters in his post-match press conference, Louis van Gaal offered a brief update on the defender.

“I don’t know how bad Evans is,” the boss revealed.

“We have to wait for a scan tomorrow but he is on crutches.”