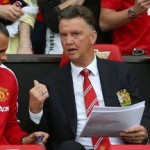 It has been reported that Manchester United boss Louis van Gaal has revealed that he has still not met with Sir Alex Ferguson.

United claimed the title in 2013 under Ferguson, who was central in appointing the man van Gaal eventually succeeded – David Moyes.

Asked if he has met Ferguson, van Gaal says: “No, until this moment I have not found the time to do that but I do not know if he is at home. It was in the planning that I would see him in the US but he called off and I have also been very busy with a lot of things.”