It has been revealed that Manchester United boss Louis van Gaal admits they need to jump a level to compete with Chelsea. 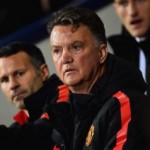 The Dutchman was speaking after their 2-2 draw at West Bromwich Albion.

“Now we have to play against Chelsea and in the Netherlands they say ‘that is another Kuche’, or another ‘biscuit’. By that I mean another level,” van Gaal told reporters.

“I have great respect for West Bromwich Albion, but Chelsea are at another level and Manchester City are as well. We have to see if we can beat them and after the two matches I can say yes or no.”