It has been reported that Manchester United boss Louis van Gaal became irritated in his news conference when asked about former Barcelona keeper Victor Valdes, who has been training with the club. 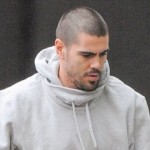 “It’s only talk from you,” said Van Gaal.

“Not from us, not from Valdes, only the media. I’m not here to inform the media. You have to wait and listen and see.

“If Liverpool are interested, he goes to Liverpool. The media are suggesting and that’s a big mistake. That’s why I’m always angry because you are inventing stories. There are no stories.

“He is training here. I give him the possibility to do that. We shall see.”