It has been reported that Manchester United manager Louis van Gaal has concerns over Radamel Falcao’s fitness. 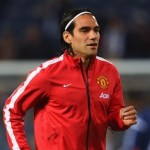 The Daily Mail reported that the Dutch international is already concerned that loan signing Falcao may not be physically capable of sustained action in the Barclays Premier League.

United signed the Colombian international on loan from Monaco at the start of the season and already have the details of a permanent deal in place if he has a good spell at Old Trafford.

However, Falcao arrived having suffered a serious knee injury last season and has only started three league games.