It has been reported that Manchester United boss Louis van Gaal is unconcerned over Wayne Rooney’s lack of goals this season. 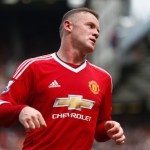 The England international heads into Manchester United’s match against Sunderland on Saturday having gone 954 minutes without finding the net in the top flight.

Van Gaal has complete faith in his skipper despite the drought, however.

“He has already scored four goals,” the United manager said.

“I don’t think that is an issue for him, for me or for the club so he shall score also in the Premier League. That I am convinced of. And you shall see it.” Victor Valdes In Talks Over Contract Release With Man Utd