It has been reported that Manchester United boss Louis van Gaal insists Ashley Young did not dive against Sunderland. 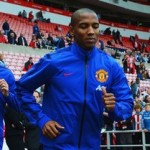 The England international was booked for diving after the interval when he went down in the box under a challenge from ex-Red Wes Brown.

“I think [the referee] could also have given a penalty to van Persie. You could say he was already falling but the tackle was coming – some referees would have given that. Nevertheless, we need to be creating more chances, rather than just relying on penalties.”