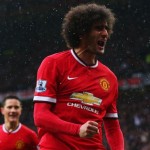 It has been reported that Marouane Fellaini’s renaissance at Manchester United continued on Sunday with another fine performance in the 4-2 derby triumph over Manchester City.

The towering Belgian international midfielder scored the Red Devils’ second goal with a powerful back-post header from Ashley Young’s stand-up cross and apart from the goal, was a handful for the City defence all day.

Fellaini struggled in his debut season at Old Trafford after joining from Everton for £27.5million in the summer of 2013 but is now one of van Gaal’s integral players which is being duly noted by the supporters.

“The fans also see that he is very important for the team,” van Gaal said.

“He scores goals, he beats pressure when we need it and he passes well.

“I am very happy for him. A standing ovation is fantastic for the players.”