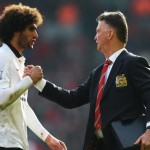 Reports are out claiming that Manchester United boss Louis van Gaal is delighted with the impact of Marouane Fellaini this season.

The Belgium international star provides a physical presence for United and an aerial threat up-front. He is also able to become a focal point for a number of attacks.

“He has qualities that now, at this moment, he can contribute a lot,” van Gaal explains. “That is why he is playing. He also allows me to give balance to the team and that is important for a manager who is looking for balance. I think he has to play higher and higher up and Michael Carrick has to play deeper.

“I have said a lot of times at press conferences, for example he is a player that gives a solution for beating the pressing of the opponents. That’s also a contribution, he has more contributions but that is one of his contributions.”