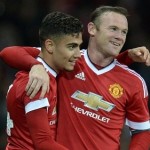 It has been reported that Manchester United boss Louis van Gaal praised youngster Andreas Pereira for his performance in the Capital One Cup win over Ipswich Town on Wednesday night.

The 19-year-old scored a beautiful free-kick in the 3-0 win at Old Trafford but van Gaal feels that the Brazilian still has a long way to go before cementing a spot in the first team.

“He can play all these positions (across the front),” Van Gaal said.

“What is realistic is dependable on the level of the players. I put always the best player in the line-up when he is working for the team.”