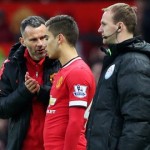 Reports are out claiming that Manchester United boss Louis van Gaal was happy with Andreas Pereira’s performance in victory over Tottenham.

Pereira, off contract in June, was a second-half substitute in the 3-0 win.

“If you are nineteen years old and then debut for Manchester United, you have a lot of talent,” said Van Gaal.

“It has been a reward for him.”

In recent weeks, Pereira’s father has talked up the prospect of moving to PSG, Juventus and PSV Eindhoven when Andreas’ contract expiring this summer.