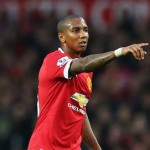 Young has won over Van Gaal with his performances at wing-back.

The People says Young has 16 months left on the five-year deal he signed when United paid Aston Villa £17million for his services.

And Van Gaal has given his backing to the offer of a contract extension.

Young, who won 30 caps for England as a winger, was one of the players who helped turn things around for United against Preston in the FA Cup last week after coming off the bench.