It has been reported that Manchester United boss Louis van Gaal is expecting big things next season from England full-back Luke Shaw. 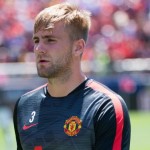 The England international joined the Old Trafford side from Southampton in a £30million move last summer but struggled with injuries last season and was only able to make 18 starts for his new club.

Van Gaal previously criticised Shaw’s fitness after he turned up to pre-season training last season overweight but now is confident his young defender is ready to achieve big things for the Manchester club.

Van Gaal said: “I think that it shall be the season of Luke Shaw. I believe in him and he has to feel that and I hope he shall show it.”

“But remember he’s only 20 years old. How many players of that age are playing in the Premier League?”

Shaw himself has stated his desire to improve next season, saying: “This season I feel much fitter, much sharper and I have the experience of a year at Manchester United behind me. The big difference is my fitness and hopefully I can keep pushing.”