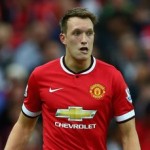 “The match against West Brom was his first after a long injury period,” Van Gaal said.

“We brought him back and he trained for more than a week with the first team, then had to play 90 minutes.

“Then he had a sore feeling in his shin. On Saturday he could not continue training, even though it was a very light session before the match.

“He had shin splints, which is very painful. I don’t know how long it will take (for him to recover).” Man Utd’s Luke Shaw Given Time Off During PSV Visit