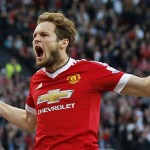 It has been reported that Manchester United boss Louis van Gaal hailed victory over Liverpool.

Daley Blind fired the hosts in front after a well-worked free kick before Ander Herrera scored from the penalty-spot after being brought down by Joe Gomez.

Anthony Martial came off the bench for his debut and scored United’s third with a superb solo effort after Christian Benteke had pulled one back with an acrobatic finish.

“I think we played better in the first half,” Van Gaal.

“We had far more control, but we didn’t create too much – I think two chances and a lot of possibilities in the first phase, but the last pass was not so good.

“That’s why I changed Memphis, to improve that last pass, and also Mata.

“The second half has been characterised because of the goal. That is a consequence of our meetings and our tactical sessions with set plays.

“That has paid off. I’m very happy with this goal because that is what we have practised in many training sessions, and now it’s coming out.

“The first goal is, of course, the goal that decides the match because after that they have to come, and then we get more space.

“Because of that we could score the second goal – very good running in behind from Herrera, a fantastic pass from Michael Carrick. I was very proud, also of the way he hit the penalty.”