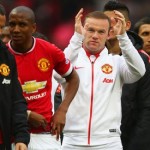 It has been revealed that Manchester United boss Louis van Gaal has hailed the leadership of Wayne Rooney this season.

Van Gaal admitted that even after the club’s disastrous start to the campaign, Rooney was still insisting that they could finish second in the league.

He said: “After so bad start. And then we had to believe the players but also the staff that we could end second.

“I remember the meeting with the players with the captain Wayne Rooney, who’s saying ‘we go for the second position in the league’ and I said: ‘YESSS! We go for it!'”

He added: “You remember away game against Chelsea? At that time, we had 50 points and Wayne Rooney sat in the dressing-room and said: ‘We go for second place’. He said that, second position in the league table.

“Then six games in a row we won, then we go to Chelsea.

“Who were the better team then? It’s easy to say that now, in this room. I can believe it, but it’s the truth. But we lost.