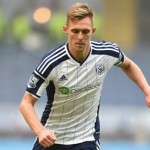 Anderson has joined Internacional, while Fletcher is now with West Bromwich Albion.

The Dutchman said: “A couple of long-serving players, Darren Fletcher and Anderson, left the club during the recent transfer window.

“Darren was one of my captains. He showed his true strength of character after being out of the game for so long and came back to full fitness after the illness he had suffered in the past.

“He has been a great servant to the club and I think we can all understand his decision to move on as he wanted to play more football.

“Both Darren and Anderson will be missed in the dressing room as they were strong characters.

“I’m sure the supporters will join me in wishing them both well in the future careers.”