It has been reported that Manchester United boss Louis van Gaal has played down an injury concern for Wayne Rooney after victory over Hull City. 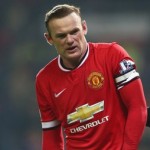 The England international was limping at the final whistle after banging his knee, but Van Gaal did not believe that problem was serious.

Rooney was also kicked in the first half but quickly ran off that knock.

Chelsea To Face Competition From Manchester United For Sylvain Marveaux