Reports are out claiming that Manchester United boss Louis van Gaal was pleased with Adnan Januzaj’s goalscoring performance in victory over Barcelona. 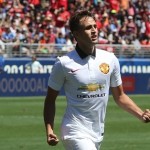 The Belgium international wrapped up the 3-1 win in added time with an excellent turn and finish.

Van Gaal said: “I think that Adnan Januzaj was very good because he always gives an option for his midfielders and defenders. He scored a wonderful goal and I think that is always important. He had to fight with two defenders and he did well.

“But it was more easy for him against the defence without [Gerard] Pique.”