It has been reported that Manchester United boss Louis van Gaal was pleased with Ander Herrera’s second-half performance in the Champions League qualifier against Club Brugge. 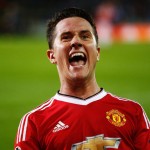 The Spanish midfielder started slowly in the game, but impressed in the second lost of 45 minutes when playing in the number 10 position following Adnan Januzaj’s withdrawal at half-time.

He provided an assist to Rooney and scored the team’s fourth with a neat finish which impressed the boss.

“He started not so good,” said Van Gaal.

“He had a lot of ball losses and also a yellow card, so at that moment I wanted to change him, but then I saw he was coming back.

“And after that moment he plays a good match on the ‘double six’ position, but later on at 10 he was better. So I’m very pleased also for him.”