It has been revealed that Manchester United boss Louis van Gaal was pleased with goalscorer Jesse Lingard after their 2-0 win over West Brom. 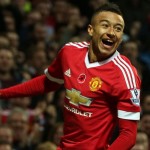 Lingard, who has been at the club since he was seven, deservedly won the man of the match award for his attacking display down the left.

The 22-year-old from Warrington was a thorn in Albion’s side all afternoon and finally got the goal he deserved – his first for the club – seven minutes after the restart.

The England Under-21 international cushioned Chris Brunt’s poor clearance and took another touch before curling the ball into the far corner in front of the Stretford End.

“I put him in the line-up in the first game against Swansea City last season at home because he had impressed me already, but then he had a very heavy injury in that game so he needed to rehabilitate and that takes a long time,” Van Gaal said.

“But I said in the beginning of the season I wanted to keep him and he had to wait for the moment that he was in better shape than his companions for the same position and since then he is playing I think he is playing very well.”