It has been reported that Manchester United boss Louis van Gaal was pleased with Sergio Romero’s cleansheet for victory over Tottenham. 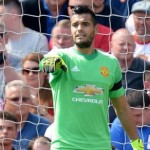 The Dutch tactician was impressed by the 28-year-old’s performance given the short amount of time he has had with the club.

“We have observed (De Gea) in preparation and that was not the same David de Gea as last year,” Van Gaal said.

“Of course when the situation has been cleared after September 1 we will look again. But I’m happy Sergio did well. He saved us twice.

“We have to improve his building up, but Sergio trained only two days with his fellow players.”