Reports are out claiming that Manchester United’s Louis van Gaal has lauded Arsene Wenger for his endurance. 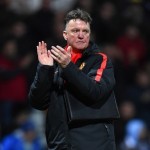 ?The French tactician has been manager at Arsenal since 1996 and his longevity in the game has been praised by United boss van Gaal who is preparing to take on the Gunners in the FA Cup quarter-final on Monday night.

?”In my opinion what he has done is amazing,” said the Dutchman.

“It can only be in England, I believe, where managers are so long committed with one club.

“It shows how much he can mean for a club as a manager. I like that. Like Sir Alex Ferguson, Arsene Wenger, I think it’s fantastic that you can do that.”?