It has been revealed that Manchester United boss Louis van Gaal has slammed Adnan Januzaj for moving on-loan to Borussia Dortmund. 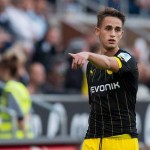 Januzaj has failed to make an impact at the German giants and Van Gaal thinks he will regret going there because he would have had a chance at Old Trafford by now.

Van Gaal said: “At a club like Borussia Dortmund, all the players there are of a certain level and I said in advance that’s a big risk for him because he has to compete with other players of a higher level – and that is not so easy.

“It’s the same thing as in Manchester United. He has to compete with higher level players and I want him to play all the matches and that is why I want to play him also in the Premier League – but he chose Borussia Dortmund.

“We have to wait and see because now he doesn’t play – but he has the talent to play.

“I am certain he has the talent to play but he has to learn a lot of things.

“Talent is important, but so is the character to develop your talent. And he can learn that.”