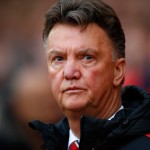 McGrath sees the need for a centre-half as a priority.

“It’s all about what you’re allowed to spend and what players will come to the club.

“Man United could have let in a few more goals against Arsenal, they were fortunate.”