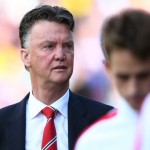 It has been reported that Manchester United boss Louis van Gaal hopes Chelsea can do them a favour against Liverpool today.

United, after victory at Crystal Palace, can secure their top four status if Liverpool are beaten today.

Though a draw would mean Liverpool could still catch United on points, their goal difference is 14 goals worse than United’s – meaning Liverpool need to win.

Van Gaal said: “It brings us a big step closer to our goal and now we shall sit with a fantastic glass of wine tomorrow to watch the Chelsea v Liverpool match.”

Asked if he might move on to the champagne if Liverpool lose, the Dutchman said: “When I don’t drink too much red wine, then maybe.”