It has been reported that Manchester United manager Louis van Gaal believes that his side should look out for Wolfsburg star Julian Draxler in the upcoming midweek Champions League clash. 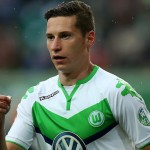 United square off against Bundesliga club Wolfsburg on Wednesday night in their Group B fixture and van Gaal is well aware that German youngster Draxler has the ability to pose a threat to his side.

The Dutch tactician said: “He was a very young talent when I was there [in Germany, managing Bayern], so I know him.

“He has to go on a long road like [Anthony] Martial, although it could be a little bit shorter because he has been playing longer on that level. He is a very good player.”

I Won’t Change My Style Of Play! – Phil Jones