It has been reported that Manchester United boss Louis van Gaal won’t jump into offering terms to Victor Valdes. 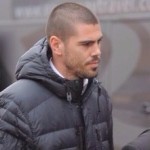 The former Barcelona goalkeeper is training with United as he enters the final stretch of his recovery from last season’s knee surgery.

The Dutch tactician does see Valdes as a long-term option and has discussed the prospect with his agent, Gines Carvajal.

However, the United manager wants Valdes to prove his fitness in match action before discussing a contract.

Even a finger dislocation for No1 David de Gea won’t force Van Gaal into bringing forward contract plans for the 32 year-old Valdes.