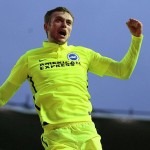 It has been reported that Manchester United boss Louis van Gaal won’t rule out recalling James Wilson from Brighton.

Wilson, who is on loan at Brighton until the end of the season and has so far scored twice in four games for the Championship side.

“We believe in him,” Van Gaal said.

“He is showing his qualities, but at a lower level.

“When we are in trouble, we can recall him. It’s a matter of a decision at a time that maybe comes, but maybe not.”