Reports are out claiming that Manchester United are not sweating too much on the injury of Michael Carrick. 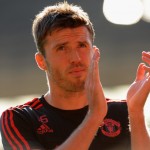 The Telegraph is reporting that the ankle problem suffered by the 34-year-old midfielder while playing for England on Friday is not as bad as first thought.

Carrick was stretchered off in the 2-0 Friendly defeat to Spain in Alicante, prompting Three Lions boss Roy Hodgson to suggest the injury did not look good.

However, United doctors are positive the damage is not too severe and although an official statement has not been made, Carrick could be back in action by before December.