It has been revealed that Manchester United striker Wayne Rooney put an end to his dry spell by scoring an impressive hat-trick in the 4-0 win over Club Brugge in the second leg of the Champions League qualifier. 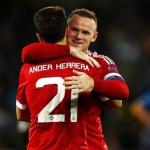 The triumph saw the Red Devils qualify for the group stage of the Champions League 7-1 on aggregate and Rooney is now looking forward to Europe’s most elite football competition after missing out last year.

“To go through to the group stage after being out of it last year is a great result. We look forward to the draw now tomorrow,” the striker said.

“It was a big disappointment last year not to challenge in it. We didn’t think it would be as comfortable as it was, but it was vital we went through any way we could.

“Over the two legs we deserved that. We’ll enjoy the draw and it is nice to be back in there again.”