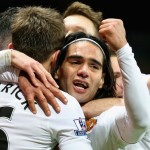 It has been reported that Manchester United captain Wayne Rooney was happy for Radamel Falcao over his goal in their 1-1 draw at Aston Vila.

The goal was the Colombian international’s second for United on his fourth start for the club, and Rooney was delighted to see the the on-loan AS Monaco star get on the scoresheet on his first start since 5 October.

“It was a great run and cross by Ashley and an equally great header by Radamel, so it was a nice goal.

“I’m pleased for him today.”