It has been reported that Manchester United skipper Wayne Rooney has been impressed by new teammate Memphis Depay. 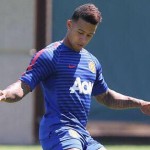 The Dutch international attacker has looked lively in his opening few appearances and the skipper hopes to continue developing a rapport with him.

“It’s still early days [for us playing together] but obviously Memphis is a fantastic talent,” said the captain to MUTV.

“We’re still working on things in training to try to get better together and get a better understanding of each other’s games which is important.”