It has been reported that Victor Valdes is reportedly eyeing a future move to Portuguese giants FC Porto. 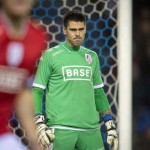 According to Portuguese publication Record, the Spanish goalkeeper hopes to make his way to the Estadio do Dragao this summer once his loan stint with Standard Liege in Belgium expires.

Spanish gloveman Valdes joined Liege from Manchester United last month and is desperate to gain a permanent move away from Old Trafford after enduring a horror stay under Louis van Gaal where he was demoted to the U21 side and also forced to train by himself.

The problem regarding a potential move to Porto, however, is that Valdes’ compatriot Iker Casillas is currently number one for the Dragons meaning the former Barcelona star would likely sit on the bench behind his old Real Madrid rival.

It is also believed that Sporting Lisbon are interested in the 34-year-old while Manchester City, who are awaiting the imminent arrival of Peo Guardiola, are also keen due to Valdes’ relationship with the Bayern Munich boss.