It has been reported that Galatasaray defender Semih Kaya could move to Manchester United this summer should the Red Devils fail to secure a move for gun Valencia centre-half Nicolas Otamendi. 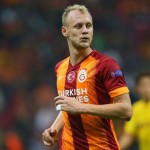 Louis van Gaal sees Otamendi as the ideal man to fix his side’s defensive frailties next season, however, Valencia are understood to be unwilling to sell the star Argentinian.

Reports in Turkey are suggesting that should van Gaal be unable to prise Otamendi away from the Mestalla, they will instead make a £5.5million move for 24-year old Kaya.

Roberto Mancini’s Inter Milan are also said to be interested in a move for the Turkish defender.