Reports are out claiming that Manchester United have opened talks with Sassuolo for superkid Domenico Berardi. 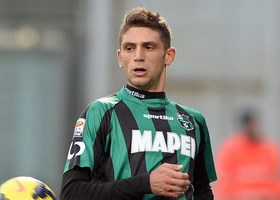 TMW reported that the reigning Premier League champions have now made a move for Berardi by opening talks with Sassuolo about a bumper €23 million deal.

However, the final say will be left with Juventus, which hold Berardi’s contract in co-ownership.

The youngster is also on the radar of Jose Mourinho’s Chelsea.