It has been reported that Barcelona are willing to listen to offers for Luis Suarez. 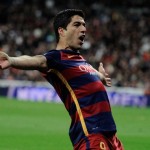 The Sun claims that the Spanish giants are struggling for cash.

And this means former Liverpool striker Suarez could be available – if the price is right.

Realistically, a return to Anfield is hugely unlikely given Suarez’s desire to play consistently in the Champions League.

But the Daily Star says Manchester giants United and City – and Chelsea – all have the huge cash reserves to pull off a deal.