Reports are out claiming that Manchester City fear being priced out of a move for Porto defender Eliaquim Mangala. 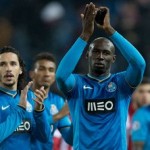 The Manchester Evening News reported that the Porto defender remains their first choice as the Blues hunt for a new partner for Vincent Kompany.

But they are facing competition from Manchester United and Chelsea for Mangala’s services – and could end up being priced out of the equation.

And the France international has caught the eye of City’s cross-town rivals who are desperate to strengthen at the back following the departures of Rio Ferdinand and Nemanja Vidic.

But Jose Mourinho’s side would appear to be in the box seat after he revealed he would prefer a move to Chelsea because it is in London.