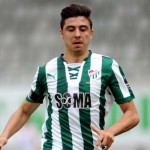 The Sunday Express reported that Manchester United, Manchester City and Chelsea are monitoring the progress of Turkish international Ozan Tufan.

The 19-year-old prodigy plies his trade at Turkish outfit Bursaspor, and has already attracted attention from clubs across Europe.

Atletico Madrid, Valencia, Juventus and the Premier League trio are all said to have sent scouts to watch the versatile defensive midfielder.

Tufan’s father broke the silence regarding his sons future by revealing multiple clubs have ‘been to see him play.’

He said: “Atletico and also Valencia have been to see him play but they are not alone.