It has been reported that Gerard Pique is set for crunch talks with Barcelona directors over his future. 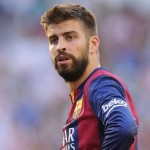 The Mirror reported that Pique’s relationship with coach Luis Enrique is already on the rocks and has become increasingly strained in recent weeks.

However, Barca officials will attempt to play peacemakers in the situation in the hope that they can prevent Pique from leaving the club in January.

Premier League giants Chelsea, Manchester City and Manchester United are all keen on signing the 27-year-old.