Reports are out claiming that PSG striker Edinson Cavani wants to move to the Premier League. 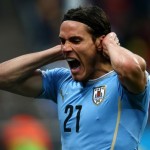 Sky Sports revealed that the Uruguay international striker has instructed his agent to investigate a potential move to the Premier League.

The Uruguay ace has been linked with Manchester United and Chelsea since the end of last season.

While he was at the World Cup in Brazil, Cavani refused to rule out a transfer to United.

Asked whether a move to Old Trafford was in his future, he said: “In football, you never know. Anything can happen.

“One day you are in one team and, the next day, you can be in another.”

Fletcher : The Fans Will Help Us Defeat Chelsea