It has been reported that former Chelsea defender Alex says Marquinhos should consider his future at PSG. 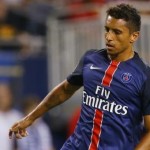 Chelsea failed with two massive deadline day bids for Marquinhos at the beginning of the month and he’s been linked with Manchester United in recent days.

Alex says Marquinhos should not take this interest lightly, paricularly as being frozen out of his favoured centre-half role by David Luiz and Thiago Silva.

Now of AC Milan, the ex-PSG defender told L’Equipe: “Marquinhos has a place in any big European club. His problem is that he has before him two of the world’s best in his position.

“If I was In his place, I would leave PSG. Especially since all the big clubs want him…”