It has been reported that Manchester United and Chelsea have been handed a boost with news that Raphael Varane wants to leave Real Madrid. 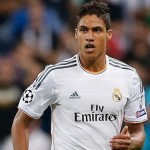 Frenchman Varane struggled to earn regular first team football under Carlo Ancelotti last season and according to reports from Spain, the defender is pondering a move away from Madrid as a result.

Due to Varane’s perceived unhappiness at the Santiago Bernabeu, Premier League duo United and Chelsea have been put on alert and will be monitoring the defender’s situation in the coming weeks.