It has been reported that Bolton Wanderers are confident securing Zach Clough to a new deal. 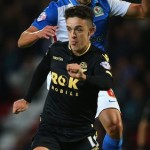 The Daily Star Sunday reported that the 20-year-old was targeted by Manchester United in the last transfer window after months of scouting.

However the striker has now pledged his future to the Championship side and will put pen to paper on a four-year deal in the coming days.

Clough has also been linked with Arsenal in the past.