It has been reported that Barcelona have left Porto defender Eliaquim Mangala to Premier League rivals. 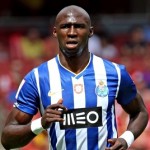 The Daily Star reported that Chelsea and Manchester United are set to battle for Mangala after Barcelona withdrew from the race to sign the French star.

Mangala is wanted at Old Trafford by new boss Louis Van Gaal as he seeks to rebuild United after their dismal 2013-14 season.

Chelsea boss Jose Mourinho is also on the lookout for a defender after David Luiz’s £50m switch to Paris Saint-Germain.

The 23-year-old fits the bill for both sides, with his stunning performances at that back for Porto catching the eye of the Premier League giants.