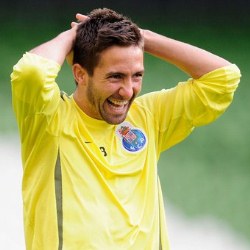 Diario de Noticias has reported that both clubs will turn to the Portuguese international midfielder should they miss out on Tottenham playmaker Luka Modric.

New Chelsea boss Andre Villas-Boas is close to the 24 year old, having revived his flagging career at Porto.

And United manager Sir Alex Ferguson spoke regularly with former No2 Carlos Queiroz about the midfielder when he was a star with Sporting Lisbon.