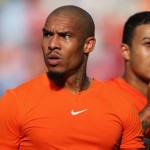 The Daily Express says reports this morning suggest that United are ready to pull the plug on a deal for Juventus midfielder Arturo Vidal over concerns about a lingering knee injury.

However, Louis Van Gaal is thought to remain keen on a defensive midfielder despite the arrival of Daley Blind, who is versatile enough to cover the position.

Vidal remains the Dutch boss’s top choice but United’s reluctance to pursue the Chilean could see them settle for De Jong instead.

Indeed, reports suggest that United will make an £8m bid for the former Manchester City man before the window closes at 11pm.

Talks have been ongoing for some time and it is thought that United remain confident of pulling off a deal at the last minute.